Pilgern mit SiNN > Blog: Alle Artikel > Projekt > From the Black Forest to the End of the World 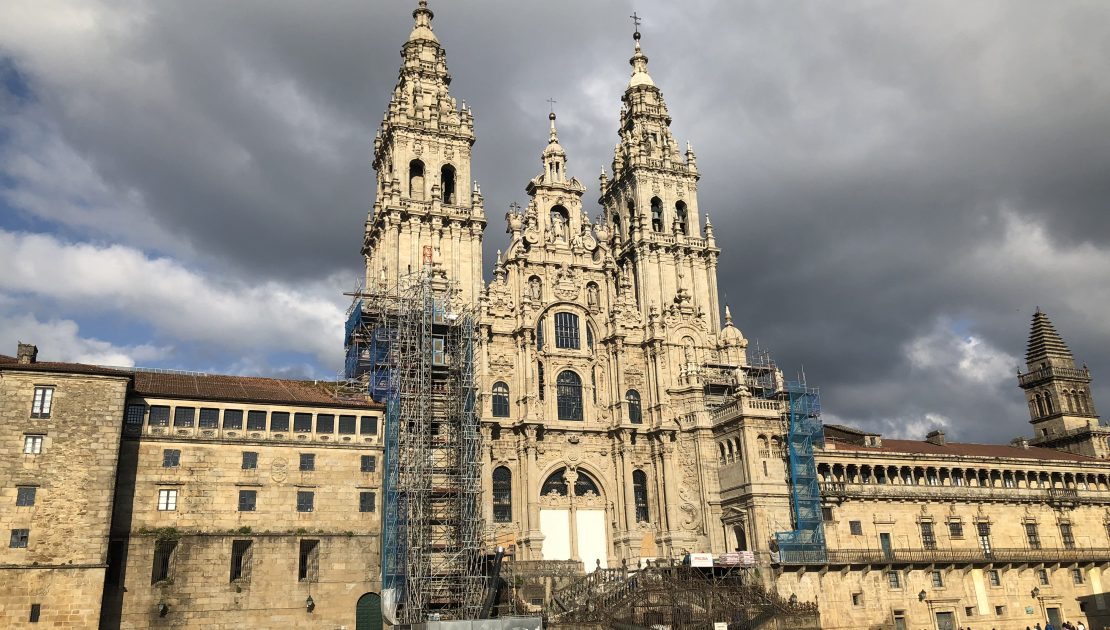 From the Black Forest to the End of the World

This is a short description of my 2018 hiking project in English and I apologize for not having translated the rest of the more than 100 blog articles. They are only available in German.

In 2014, when I was telling my friends that I would go the Camino (St. James Way) from Saint-Jean-pied-de-Port at the foot of the French Pyrenees to Santiago de Compostela near the West Coast of Spain, many of them thought that I was a little crazy. In March and April that year I walked the complete Spanish part of the Camino with about 800 kilometers (500 miles) in 31 days and it was wonderful.

On my way home from Spain I knew that I would come back one day. In 2016 I thought that it would be a nice challenge to walk from my home town Freudenstadt in southwestern Germany to the phenomenal cathedral of Santiago de Compostela. Just like in the middle ages, where the people started their pilgrimage at their front door. Later that year I spent hours and hours with studying maps and thinking of walking through the Black Forest, crossing the river Rhine and France on the way to the Spanish Border.

On my birthday on November the 15th 2017 the decision was made to start the project early in 2018 and walk from Freudenstadt to the end of the world at Cap Finisterre on the Atlantic Ocean. But I did not want to do it just for me. I had to find something bigger, something where I could say that it makes sense to walk the 2,500 kilometers. And yes, I found a local non-profit organization called “Stiftung Eigen-SiNN” which helps and supports children and teenagers to find their way.

Donate for the children now

I promised to donate one Euro per kilometer walked. On this blog I write about my experiences, show pictures of the beautiful landscape and of people I meet on the St. James Way. With the money collected here we support a group of about 18 children coming from families where the illness of parents or brothers and sisters dominate their home life. In the “Butterfly Group” they are supported by professional educators and social workers once a week. The small ones cook and eat together, they can talk, play and enjoy their childhood.

So I started my way on January 30th 2018 and for the first 100 Kilometers my friend Hermine walked with me to Freiburg. The next day, now alone, I crossed the French border, walked through the Alsace region to the small city of Thann where I continued now on the burgundy way via Belfort, Beaune, Cluny and Montbrison to Le-Puy-en-Velay. That was the loneliest part of the Camino where I several times thought about giving up. But I continued and met beautiful people past Le Puy.

Together with Natalia and Michel, both from France, I enjoyed beautiful days hiking through the Massif Central to the medieval town on Conques. On day 52 I reached the city of Cahors with the imposing bridge “Pont Valentré” crossing the river Lot. This was one of the milestones of my project: first half of the way was walked; just another about 1,250 kilometers to go. The paths where really wet and muddy again although I had to wear my rain suit only six or seven times in 112 days.

A few days before reaching Saint-Jean-pied-de-Port there where breathtaking views of the snowy summits of the Pyrenees. From St. Jean on I continued my walk on the “Camino Francés” through northern Spain. Now it got crowded and sometimes it was not easy anymore to find a place to sleep. Some of the hikers where loud and behaved ruthless; they were not pilgrims. But I also met so many beautiful people like Robin and Eileen from California, the Irish guys, Michael from Germany and the young Camino Couple Livia and Dominic.

Because I took my work on the Camino (which I definitively don’t recommend) I had to leave my “peer group” of people from the beginning of the Camino Francés in Los Arcos. The next days where short ones with plenty of work on my laptop. On the first of May I reached the beautiful city of Burgos with the amazing gothic Cathedral where I had a work and rest day.

From Burgos to León you cross the Spanish Meseta, an almost flat plateau which has its own charm. I really like walking the sometimes straight and lonely roads where there is nothing but a single barn for 16 Kilometers. Another day you can see your way for the next hours from the top of the mesas. Here they grow the wheat for all the white bread people consume in Spain.

From Astorga I returned to the wonderful city of León where Hermine joined me for the last three weeks. We climbed all the way to the Cruz de Ferro and then walked down to Ponferrada with the beautiful Castle of the Templar Knights. On our walk to O Cebreiro we met Theresa and Jean-Marc who did the Camino with their three-year-old boy and six-weeks-old daughter. Respect! From here the way leads us through the wonderful and green Galicia. The last five days from Sarria to Santiago where really crowded. Simply too many people.

We reached Santiago on Sunday, 27th of May and we were welcomed by my mom and a friend of her. Together we spent another day without walking before continuing to the end of the European world at the Cape Finisterre, another 90 Kilometers following the setting sun. On sunny June 2nd we reached the lighthouse and the 0.0 km milestone after walking 2,528 kilometers.

I am so glad and happy to be able to finish my project without serious injuries. Thank you to all the wonderful people I could meet on the way and to all the people who supported the project by donating for the children. Together we reached 14,460 Euro and it is still possible to donate.

Donate for the children now